Employees of Glasgow-based Mediascape were delighted to hear that they are to become the owners of the company in a move which sees the majority of the shareholding transfer into an Employee Ownership Trust.  Angus and Shona Knight, owners of Mediascape, announced their plans at a meeting of all employees. The couple had considered a number of options and rejected several approaches to buy the company.

Mediascape designs, supplies, installs and maintains audio-visual and videoconferencing systems working with an impressive client list that includes the University of Glasgow, Strathclyde University, St. Andrews University, Historic Scotland and the National Trust for Scotland as well as many prestigious private and public sector clients. The company was set up in December 2003 and started trading in January 2004 with four members of staff. Turnover for this year is likely to be in excess of £5m, the company’s best trading year yet. There are now 24 employees.

We spoke to the team about their experience of transitioning to employee ownership. 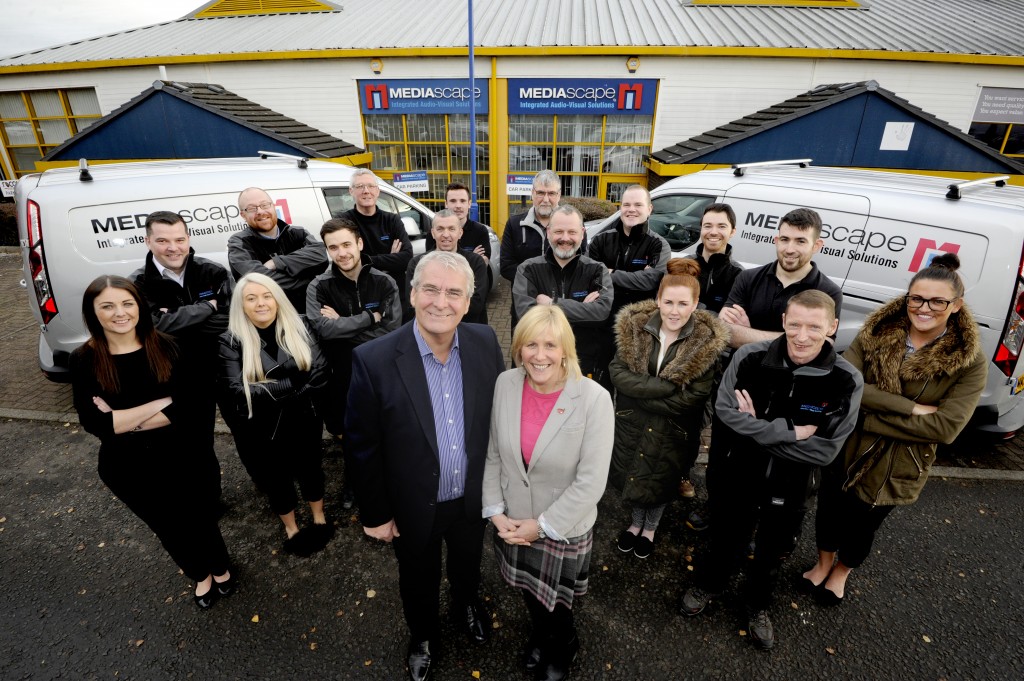 The Mediascape team with founders Angus and Shona Knight at the front.

Shona said:  “Too often a company is sold and before long, it disappears and the jobs go.  We couldn’t do that. We have a very talented team of people at Mediascape who have shown such loyalty to Angus and I over the years.  It was time for us to recognise that loyalty.”

Angus commented: “One of the attractions of choosing this path is that there will be continuity for Mediascape customers and staff. Shona and I plan to stay on for the next few years to ensure a smooth handover and allow the management team time to get to grips with running the business.  We’re retaining a 20% stake in the business to demonstrate our commitment to the staff that we’re still part of the show.”

Lee Ferrie, one of the first employees of Mediascape and now engineering manager, added:  “Mediascape is a great company to work for. I guess we were all a bit concerned about what would happen when Angus and Shona decided it was time to move on. Now, our future is in our hands and it’s our job to continue the company’s success. It’s an exciting opportunity and we’re all up for the challenge.”