Bees, thumbs up and visual minutes made for a different conference experience at this year’s Co-operative Congress.

Here, CDS specialist adviser Jaye Martin talks through some of the key points from the session.

The Town Hall in Birmingham, with its impressive architecture and historic organ dating from 1834, is not a bad place to spend a few hours. Even if it is on a Saturday (the middle Saturday of Wimbledon, a World Cup Round of 16 day)… and it’s sunny in Glasgow.

Being a consummate professional, I was able to set all this aside and concentrate on the subject at hand. Which was, of course, co-operation – or, more specifically, Co-operation: How?

This year’s Congress had been trailed as a pared down, back to basics approach to provide a space for open and honest discussion about the future of the co-operative movement. Two themes from the International Co-operative Alliance’s Blueprint for a Co-operative Decade were used as the focus of the debate:

The pitches, debates and pledges stemming from these themes were used to help shape an action plan for the movement. Delegates were given voting cards with ‘thumbs up’ and ‘thumbs down’, to be used throughout the debate whenever the mood took us. 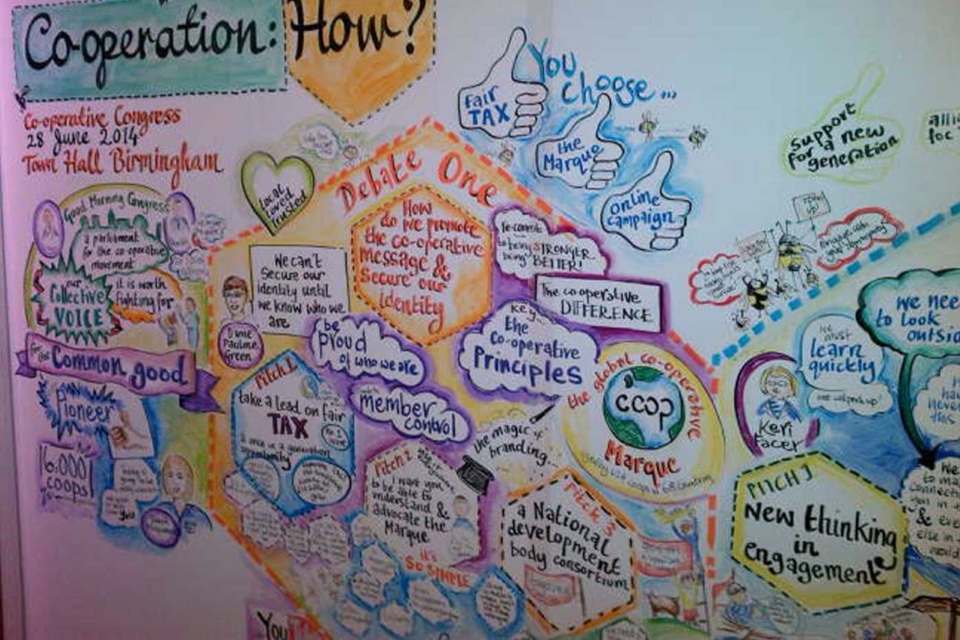 Visual minutes at the Co-op Congress

The take-aways were, for me, around the innovative tools employed to make this a different and truly more interactive conference, so I’m giving a thumbs up for: