There is a question which has puzzled me for a while – why are there so many more employee owned businesses in America?

So I was thrilled to be invited to the National Center for Employee Ownership’s Annual Conference in Minneapolis – the perfect opportunity to go in search of the answer!

This year’s conference attracted a record attendance – over 1000 delegates. It even had a waiting list of 250 people!  The conference was buzzing with people sharing their experiences, from how to structure an Employee Stock Ownership Plan (ESOP) to how to involve the most employees.  There were lots of different breakout sessions – each equally interesting which made it quite a challenge to decide which ones to attend!

Some of you might not have come across ESOPs before.  It was an area I was particularly fascinated in, especially how it has helped the American economy.

An ESOP is the mechanism – operating under US retirement law – which encourages capital expansion and economic equality.  It provides a means by which employees can build personal wealth that is realised upon retirement.  To policy makers, it is also an effective way of addressing the challenges of financing an aging population.

Recognising these benefits the US government introduced tax incentives to stimulate the creation of ESOPs.  Owners that sell more than30 per cent of their shares to an ESOP can defer capital gains tax by investing the proceeds in stocks and bonds. This legislation has proved a real catalyst – 30 years ago there were only 200 ESOPs and now there are 11,500!

So, could tax incentives have a similar impact in the UK?  It seems many believe they could. HM Treasury is currently considering the options and we eagerly wait to see what is announced in the 2013 Budget.

However, I shouldn’t give the impression that ESOPs only occur at the time of ownership succession.  They are also an effective mechanism for financing investment and are a very tax-efficient model of ownership.  There is strong evidence that this form of ownership is working – more than 100 studies have shown ESOPs can perform between eight and 11 per cent better than conventional businesses.  And, ESOP retirees generally have three to four times the retirement assets of those in non-ESOP companies. These are pretty convincing statistics.

For me though, the key learning from the conference was the importance of developing an ownership culture.  Employee engagement is the key to achieving performance benefits and maximising value, with staff feeling involved and able to influence business decisions and outcomes.

This statement sums it up well … ‘It is not pixie dust … owning stock is the foundation, with the solution lying in communications, education and trust.’ A mantra with meaning.

Of course I never miss an opportunity to see business models in action so while in Minneapolis I visited a few employee owned businesses – just to see if we could learn any more from our American friends.

I enjoyed a fascinating visit to Padilla Speer Beardsley, a PR company with 125 employees.  It (like many employee owned businesses) is a proud winner of the ‘Best Companies to Work For’ Awards.  Peggy Hansen provided me with valuable insights to the methods that they use to engage staff including  the ESOPulator – which sounded an effective and fun way of helping staff value their future benefits! 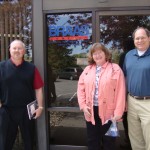 The importance of investing in an ownership culture was reinforced at Braas, distributor of industrial automation products.  Here I was instantly aware of the positive energy generated by open communications.  Joe Stewart, Ray Robbel and Janis Negratti-Samuel highlighted the high levels of business awareness that exist across the company. They captured it beautifully for me with the question ‘how many other warehouse managers would know their stock: equity ratio?’ 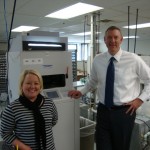 Walman Optical is a large company with 860 employees across 40 locations.  It has achieved productivity improvements and increases in stock price every year since it started focusing on building an ownership culture.  Martin Bassett and Missy McManigle described how this has involved education, communications and participatory management.  Their ‘New Visions’ initiative results in between 20 and 30 staff ideas being adopted each year, with those that put them forward getting 10 per cent of the first two years’ financial benefit.  One lucky person received a $42,000 cheque!

So, lots to take in from my visit stateside. And as ever many lessons for Scotland.

A very big ‘thank you’ to everyone who made me so welcome and shared their stories.   And, a special thanks to Loren Rodgers and Corey Rosen, NCEO, for inviting me to participate in their conference.

Employee ownership is well established in the US with an expected increase of 300% by 2020 – we have a long way to go to come close to our American friends. However, from beginning to end, this trip has given me, and Scotland, much to aspire to – onwards and upwards!